News
You are here: Home / News / Blog / Events / Jasper Gibson and Jacqui Dillon, In Conversation – Fiction about Psychosis: I... 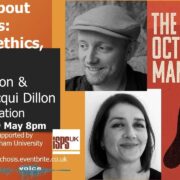 An ISPS Webinar supported by Hearing the Voice, Durham University

To register your place, please go to https://fictionaboutpsychosis.eventbrite.co.uk/ .

Fiction is at the heart of human culture. Now is a perfect moment to ask what we need from it, and our storytellers. – Nathan Filer, Asylum (winter 2020) p 11.

What challenges do writers and readers of fiction face when it comes to stories about madness?

Jacqui Dillon – activist, survivor and consultant on The Octopus Man – joins Jasper Gibson to discuss how this novel came into being and to explore some of the questions it poses around ethics and imagination, literary license and personal and political responsibilities.

Jacqui Dillon  is an activist, writer and public speaker and has lectured and published worldwide on trauma, hearing voices, psychosis, dissociation and healing. Jacqui has co-edited 3 books has published numerous articles and papers and is on the editorial board of the journal Psychosis: Psychological, Social and Integrative Approaches. In 2017, Jacqui was awarded an Honorary Doctorate of Psychology by the University of East London.

Jasper Gibson was born and bred in Parwich, Ashbourne, Derbyshire. He now lives in East Sussex and is the author of one previous novel, A Bright Moon for Fools. Jasper has been writing professionally for over twenty years for magazines, TV, and online. He is the co-founder of thepoke.co.uk, and co-creator of the satirical chat show ‘Tonight… With Vladimir Putin’.

Their conversation will be introduced by Angela Woods, ISPS Trustee, Associate Professor of Medical Humanities at Durham University and Co-Director of Hearing the Voice.